Digital Yacht's SeaTalk to NMEA (ISO) Converter is a small, but powerful interface that provides bi-directional conversion between a SeaTalk network and an NMEA 0183 network or device. Taking its power from the SeaTalk network, the ST-NMEA Converter features a full, multi-transistor SeaTalk 1 interface, an opto-isolated NMEA 0183 input and differential NMEA 0183 output that allows key navigational data to be reliably shared between the SeaTalk and NMEA0183 networks.

For developers and advanced users that want to access the raw SeaTalk data, the ST-NMEA converter can also be configured to work in a special “raw data" mode ($STALK) which is gaining support in some Open Source projects.

The ST-NMEA (ISO) Converter is ideal for connection to one of Digital Yacht's wireless NMEA servers, allowing SeaTalk owners to go wireless and aUSB Version of the ST-NMEA Converteris also available for direct connection to a PC, Mac or even a Raspberry Pie embedded Linux system. 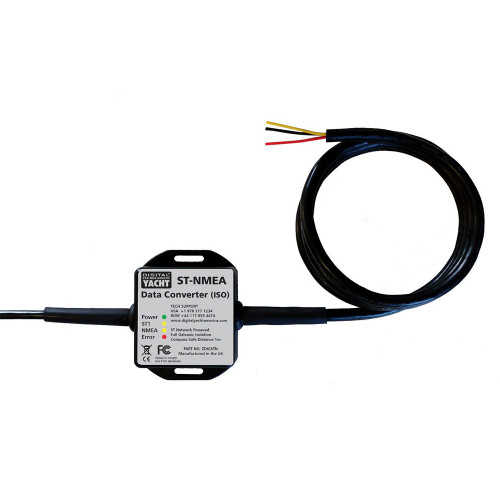